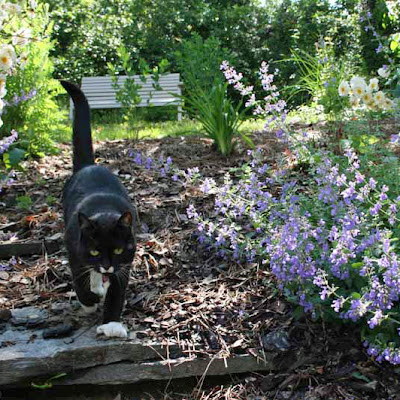 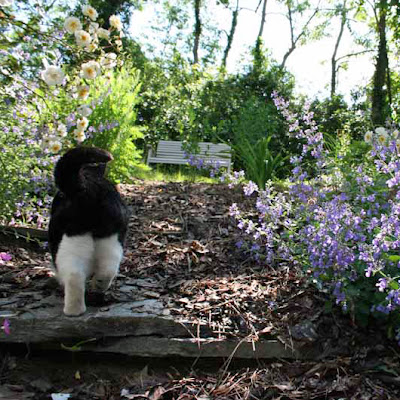 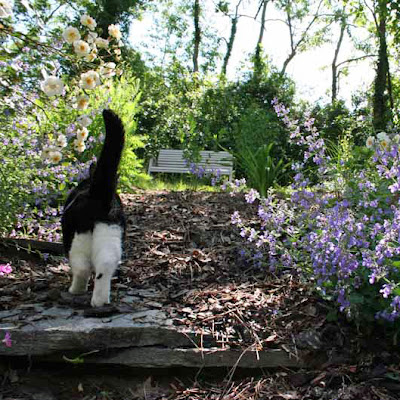 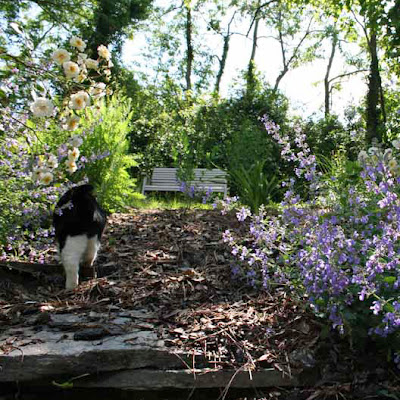 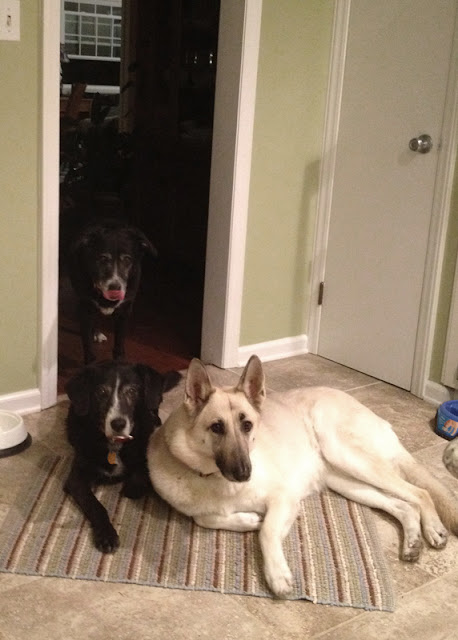 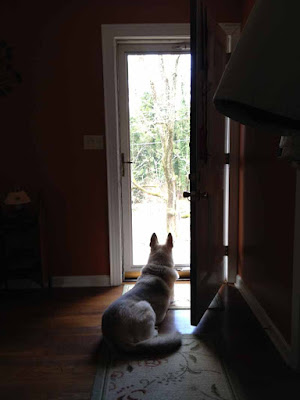 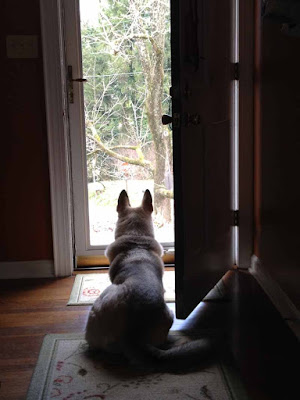 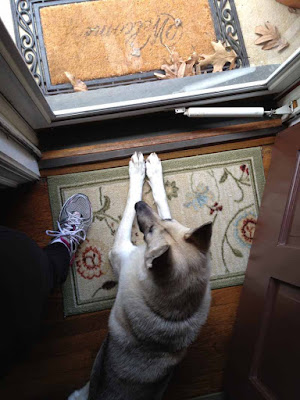 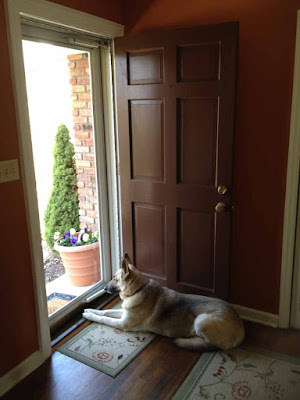 Thought for the Day:
It is a good thing to have a dog waiting for you.

In The Mood For Love The neighborhood turkeys have been putting on quite the show lately. For a bird with the distinction of being a rather ugly creature, the turkey transforms himself into a creature of wonder and beauty when he's in the mood for love. During the spring, the male turkeys strut and carry on for the females, who generally act as if they could care less.

One day early in the spring there was a lone turkey out in the street, proudly displaying his magnificent plumage, fluffed up and colorful, deliberately strutting one way and then the other. No other bird was in sight. The general consensus was that he must have been practicing his moves.

My office window looks out onto the driveway and back of the property. The male turkeys enjoy using the driveway as their "stage" because it makes for a much more impressive sound when they drag their wings (if you've never heard the "wing drag" before, you would be amazed at how loud it is, especially on concrete!) 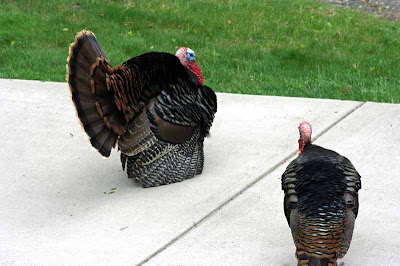 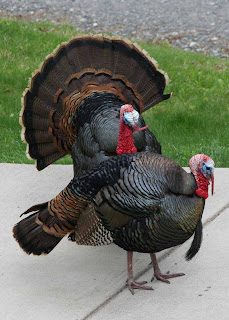 A few days ago I was on an important conference call and right outside the window (literally, feet away), were a couple of male turkeys strutting for all they were worth. Well, one was giving it his all; the other seemed somewhat less invested. It was amusing to consider that the people on the other end of my conference call would never in a million years be able to guess what I was watching as we discussed a potential business partnership. The show went on and on. Eventually I got curious. I didn't see any other turkeys around. Were these two practicing?
Then I spotted her. A lone female turkey at the edge of the driveway. 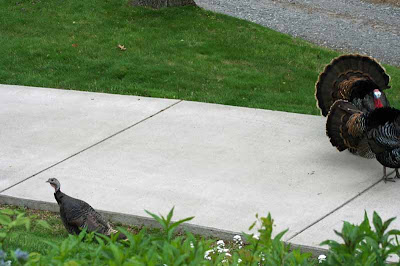 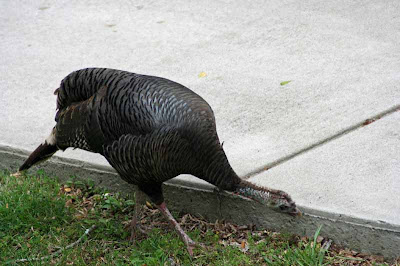 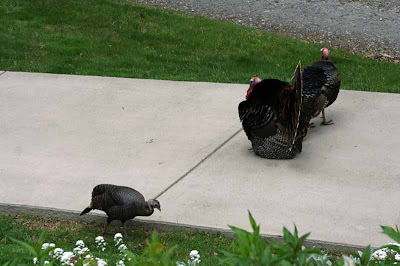 "Hey there good lookin', want to go out looking for insects together later?" 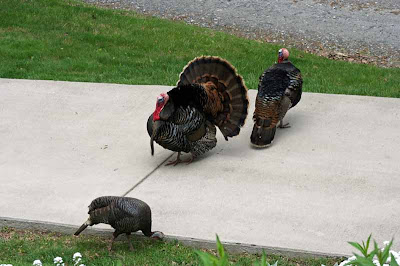 "Have you ever seen such fine feathers? Such a strong chest?" 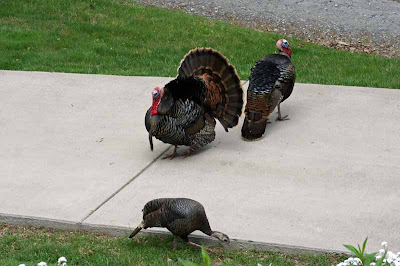 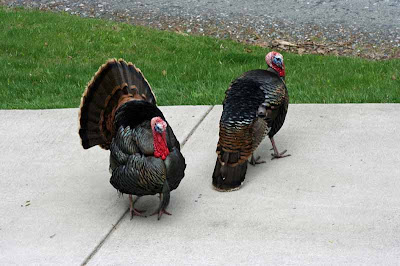 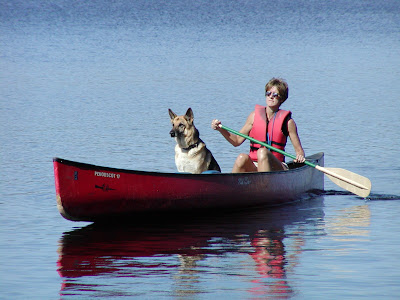 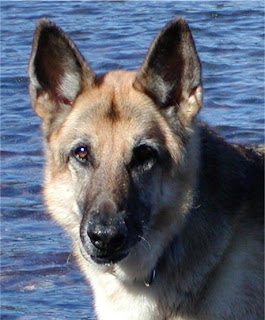 My post last weekend about Sonia's sweet Flora brought back memories of the dog that stole my heart - Jessie, the German Shepherd that came into my life back in 1991. Oh what grand adventures we had in those days, hiking, camping, canoeing, exploring! She died in 2004, having spent more than 13 years making me a better person and this world a better place. Truly! What an amazing dog she was - gentle and wise. I swear she could read my mind, and her vocabulary comprehension exceeded that of a toddler.

I wasn't as familiar with dog rescue in those days, and I found Jess at a farm out in the country that bred German Shepherds. They just had two adult dogs in addition to the litter of pups, and all looked very well cared for. I had decided ahead of time that the new puppy's name would be either Darcy or Luka (with Sophie a distant 3rd place), but when I met her, all those carefully selected names fell by the wayside. It was "Jessie" that fit. 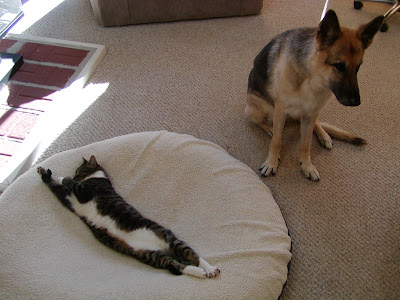 When I first met baby Jessie, she was annoying the heck out of her dad, a huge black and tan shepherd trying (unsuccessfully) to get some peace and quiet behind patio furniture on the porch. The old farmer reached down, scooped her up and held her out to me. And looking back, I guess that's the moment it all started. When I held that ball of fluff and puppy breath in my arms for the first time, I was smitten. But I had no idea how strong that relationship would be. 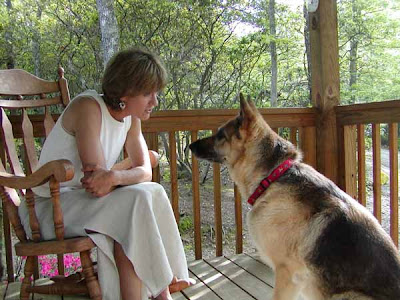 Everyone loved Jessie. I joked later that Jessie had friends from one end of this country to the other and received more sympathy cards when she passed than my parents did! The sadness of saying goodbye has receded with time, leaving behind the gift of 13 years of great memories. Today is her birthday, and since she never got to be a part of this blog, I thought I'd share a few of my favorite photos today in her memory. 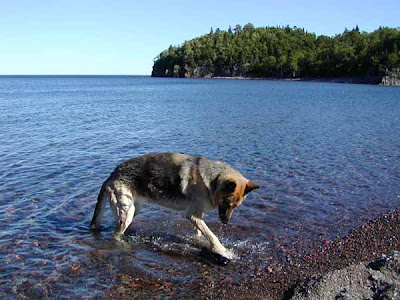 Far too many of them include me, but it can't be helped! I never could get Jess to "smile" for photos - she would always look so serious and grim when I took her picture. It was as if posing for a photo was a dreadful task to be endured obediently, but certainly not to be enjoyed. But if the two of us were together doing something, with someone else taking the photo, then I could often get her normal happy look.

The photo below is one of my favorites. I'd just raked up a big pile of leaves, and couldn't resist playing with Jessie for a moment in the middle of the pile before doing the responsible thing and getting them all to the curb. It was our last fall together, although I had no way of knowing that at the time. Those days though, I knew she was getting up there in years, and I treasured every moment we had together. 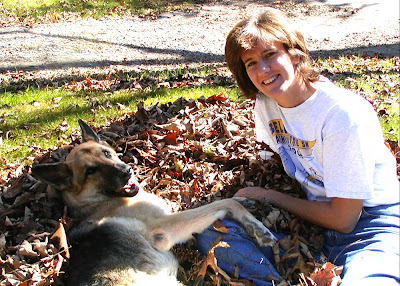 Happy Birthday Jess! I still say you're the greatest dog that ever lived.
Posted by Brenda at 8:47 AM 12 comments:

Pawprints on Our Hearts: A Tribute To Flora

There are dogs, and then there are DOGS. You know, that special one that comes into your life and changes it forever? Well, my visits to the blog Leaves of Grass during the past year have shown me that Flora was the latter sort of dog, holding a very special place in the heart of blogger Sonia A. Mascaro. I have been touched by their bond - it reminds me so of the connection I had with my German Shepherd Jessie. Dogs like Jessie and Flora bring such love into our lives, love that endures the passage of time. And while other dogs may come into our lives, and we love them all very much, there remains that special one that lives on in our hearts forever. I recently asked Sonia if she would share Flora with us, in words and pictures. Today's post is a result of that request - a tribute to Flora. 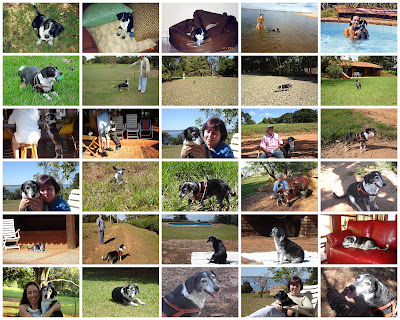 On a tiny black and white puppy was born to a stray mother dog on the campus of a University in . This little pup faced homelessness and an uncertain future, but lucky for baby Flora, Sonia's daughter found and rescued her, welcoming her into a family that would cherish her every day of her life.
Sonia tells us that Flora loved to play with a ball, run at the beach and take strolls with the family around their neighborhood. She never enjoyed swimming in a pool, but loved to swim and play in a dam near their house. Flora loved to go for walks, and when she suspected it was time for a walk and spotted the leash, she would get very excited and do a "happy dance". Sonia says she would literally jump in the air and spin in circles: "she was always ready to go! Flora was very smart and active even as an old lady." Another favorite activity that Sonia and Flora enjoyed was napping together on the couch. When night came, Flora had her own bed and blanket, but she always preferred the people bed. She had a sweet tooth, but also loved getting a piece of bread, meat, and many kinds of fruits and vegetables. 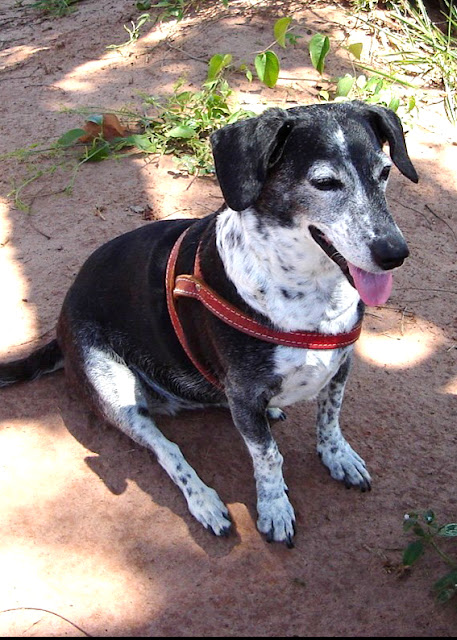 Sonia shares that there were a few things that Flora did not like. She didn't care for strange dogs or people, and she hated cameras!


Sonia says whenever she would point the camera in her direction, Flora would turn, stare the other way, or leave the room (my goodness, that sounds just like Katie!).

Sonia says - "Unfortunately, I write about my beloved Flora from a bygone time, as my dearest and adorable friend died at almost 14 years of age on . But it was fortunate that for so many years Flora enjoyed good health and a happy life, much loved by me, my husband, my daughter Sofia and my son Fernando. My dearest, lovely and adorable friend Flora will be always in our hearts and in our memories. We loved her so much and we miss her deeply every single day." 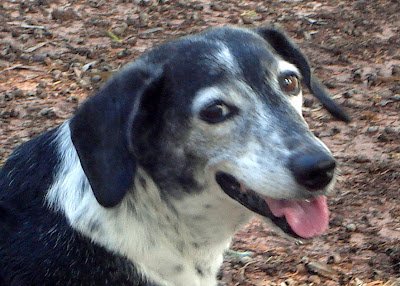 I told Sonia that Flora must be out there somewhere smiling and wagging her tail, to know how much she is still loved, and that these wonderful memories live on today. Who knows, maybe Jessie is with her, both of them out there somewhere, waiting for us to rejoin them some day. What a happy thought! :)


(Thank you to Sonia A. Mascaro from Leaves of Grass for the photos and stories of Flora.)
Posted by Brenda at 5:30 PM 21 comments: