Jessie, Wonder Dog of the North 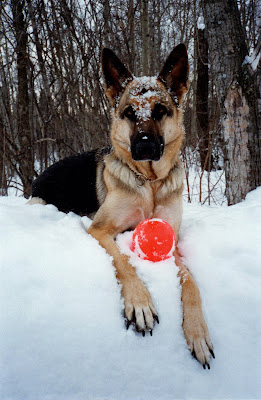 Yesterday I mentioned my previous German Shepherd Jessie, and how much she loved snow. Remembering her always brings a smile, because she was the greatest dog that ever lived.
She was intelligent beyond anything I'd ever experienced with a dog. I'd read somewhere that the average German Shepherd has the language comprehension of a 2 year old child, and Jessie certainly matched or exceeded that. We would caution- "watch what you say around the dog!"

Jessie beat the odds multiple times, overcoming a run-in with a car as a puppy, a 'discovered in the nick of time' spleen that was about to rupture, and lymphoma, living to the ripe old age of 13 - old for a German Shepherd. The years since her death in 2004 have only served to elevate her status as the greatest dog that ever lived. It's funny, the beloved pets of our past become more saintly with each passing year, and we tend to forget they ever did anything wrong. Or at least that's what I've heard. Jessie never did anything wrong, so I wouldn't know. 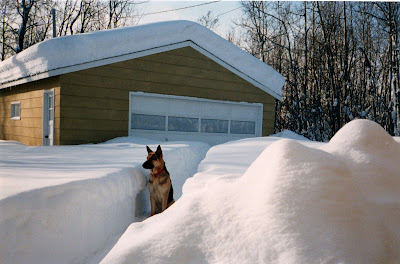 That dog loved the cold and snow of northern Minnesota. She was born and raised in the south, so I was surprised to discover how quickly she adapted to life Up North. One of her favorite games involved her orange ball. I'd toss it into a snowbank, and she would pounce with delight on the spot where it had disappeared and proceed to dig it out (maybe she was part terrier??). At other times she had to put up with me and my antics, like making her pose with the snow dog I created. 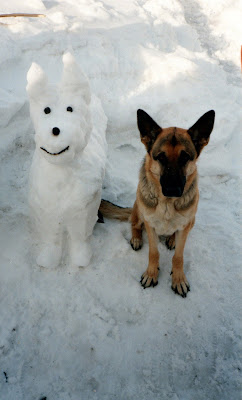 Then I decided that Snow Dog looked lonely and needed a Snow Owner, so I created one. She obliged me by posing with the whole family. 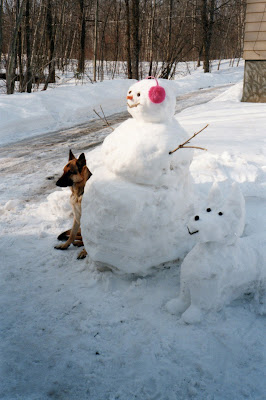 "Good dog Jessie! Now we can go play with the orange ball some more!"

What a great dog she was, the best that ever lived.
Posted by Brenda at 8:07 AM