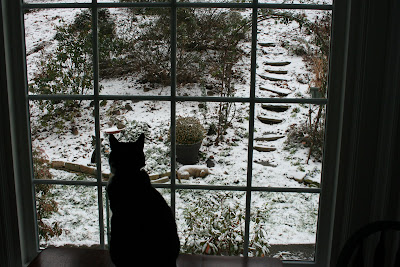 Actually, make that 12 or so turtle doves! Don't know if they show up in the photo, but Lucy is watching a dove invasion. Woke up to the season's first snowfall this morning, and it looks like the doves have decided to hunker down in the relative shelter of my Baby's Blanket rose bush. Brrrrrr, it's cold out there! As I type these words, the wind is howling outside my library window, blowing thousands of tiny snowflakes in swirls through the air. The doves are all fluffed up against the cold. 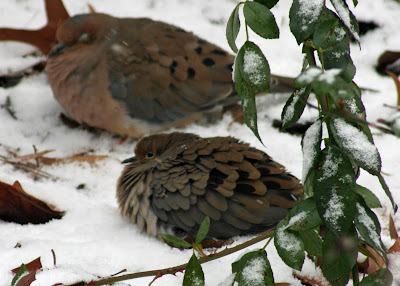 Except a few that are eating the food I put out for the cardinals. 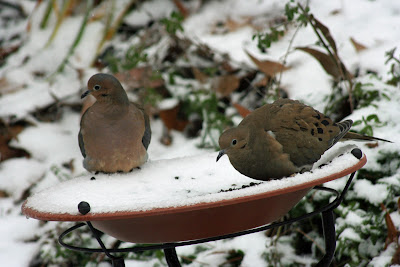 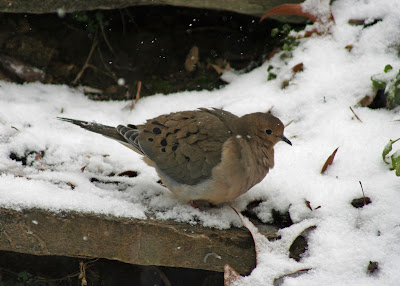 Okay, for the sake of accuracy, these aren't turtle doves, but rather mourning doves. Turtle doves are a species of dove found in Europe and Russia. Mourning doves, however, are fascinating birds. Banding studies indicate that they live about 10 years in the wild, and mate for life. Lucy is going from window to window, complaining bitterly because she wants to go out and be with the doves.
﻿
﻿

She's driving us all crazy. Never in my life have I had such a vocal cat, except for my childhood cat Sugar, and she was a Siamese. I have tried to explain to Lucy that it is way too cold for a kitty out there today, but she is clearly not convinced. She seems to think it would be fun to go play with birds that are just sitting on the ground like this: 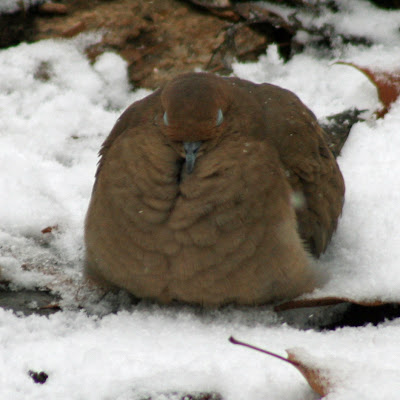 In honor of the Christmas season, here's a bit of trivia about turtle doves. Do you know how they got their name? Like our North American mourning dove, which got its name from its mournful song, the turtle dove's song also figures in its name. The turtle dove's song is a deep, gentle "purr, purr." To some people's ears the song sounded more like "turr, turr," which caused them to refer to the bird as "Turr-tle Dove." The purr, purr people didn't argue because calling the bird      Purr-tle Dove was just too weird.

Thanks to www.birdwatchersgeneralstore.com/TurtleDoves.htm for that bit of trivia! Now, the next time you hear someone singing the Twelve Days of Christmas, you can ask them if they know how turtle doves got their name!
﻿﻿
﻿
Posted by Brenda at 9:47 AM