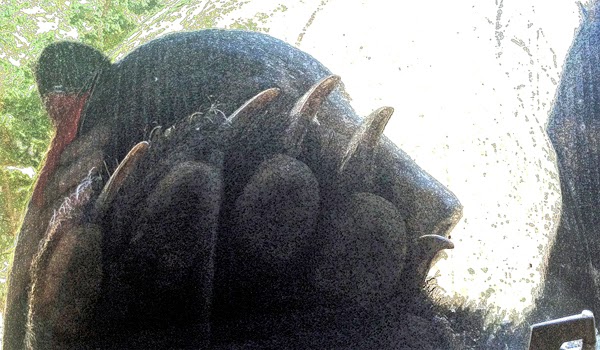 The bears are awake, and hungry! We had some major bear drama this week with the first bear sighting of the spring. It had been a routine morning in my home office - the usual series of phone calls, training proposals, and WebEx meetings. Shortly after noon I went upstairs to make a sandwich for lunch, Lady accompanying me as she always does. When we returned, I was surprised to see a large bear walking past the window next to my desk. Somehow - miraculously - Lady did not see or hear it. She returned to her spot by the futon and lay down next to Katie, and I was able to discreetly move toward the window and take some great pics as Mr. Bear checked out the area in back where I've been feeding the birds all winter. 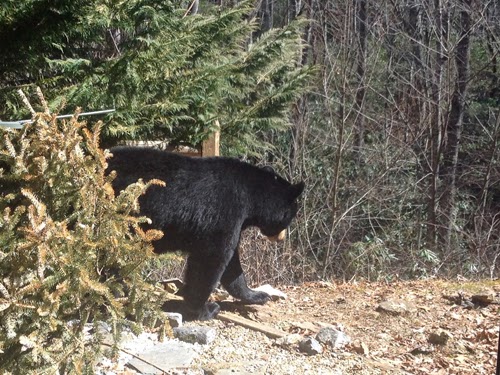 At one point he seemed startled by the moon birdhouse. I watched as he huffed at it, then took a cautious sniff, before proceeding to snack on the seed atop the overturned planter. 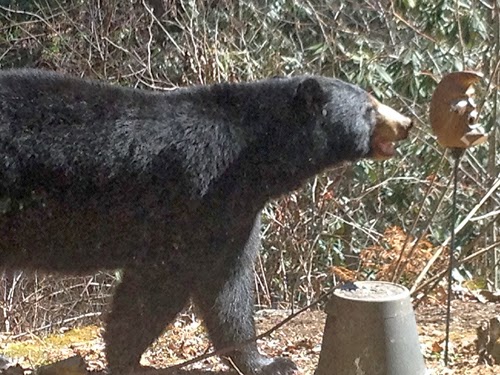 We haven't had a bear come through here since last fall, presumably due to the colder than average winter. Bears around here don't go into true hibernation the way they do up north, but sightings are less frequent, and I'd been counting my bear-free blessings. Recently however, there have been stories of bears out and about on the other side of the neighborhood, so I knew it was just a matter of time. The warm weather draws them out and they start to roam. Unfortunately for me, this also means it's time to take the bird feeders down. :( 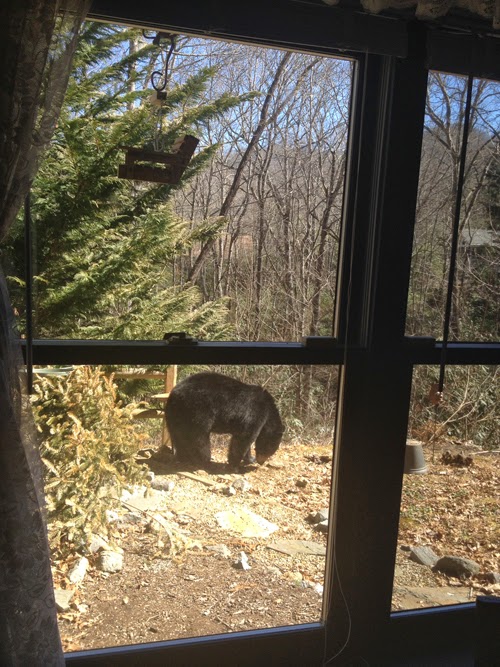 Black bears are beautiful, and I'd probably enjoy seeing them a great deal if they weren't such a nuisance to my bird watching. But, it's hard to fault any creature for taking advantage of an easy snack. This particular bear watching episode was quite entertaining until... 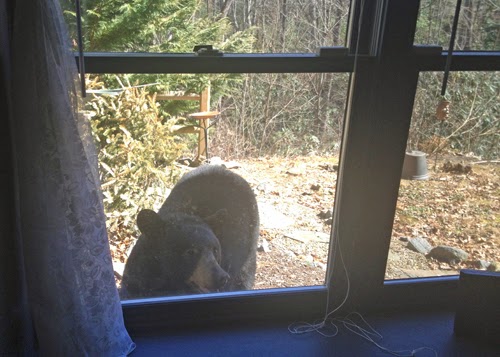 No Mr. Bear, you are not invited to the 1 pm WebEx meeting! Go away! Shoo! I waved my hands ineffectually, not wanting to make noise and wake up Lady. I couldn't figure out why he was looking in the window. Then I realized he wasn't interested in me, he was interested in the feeder hanging on the hook above. 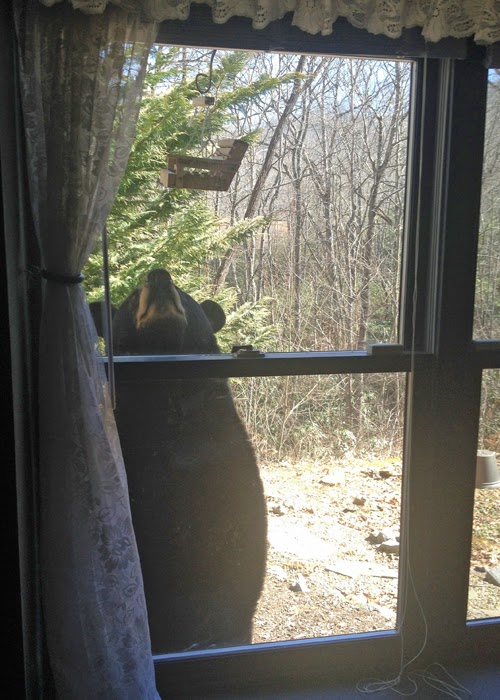 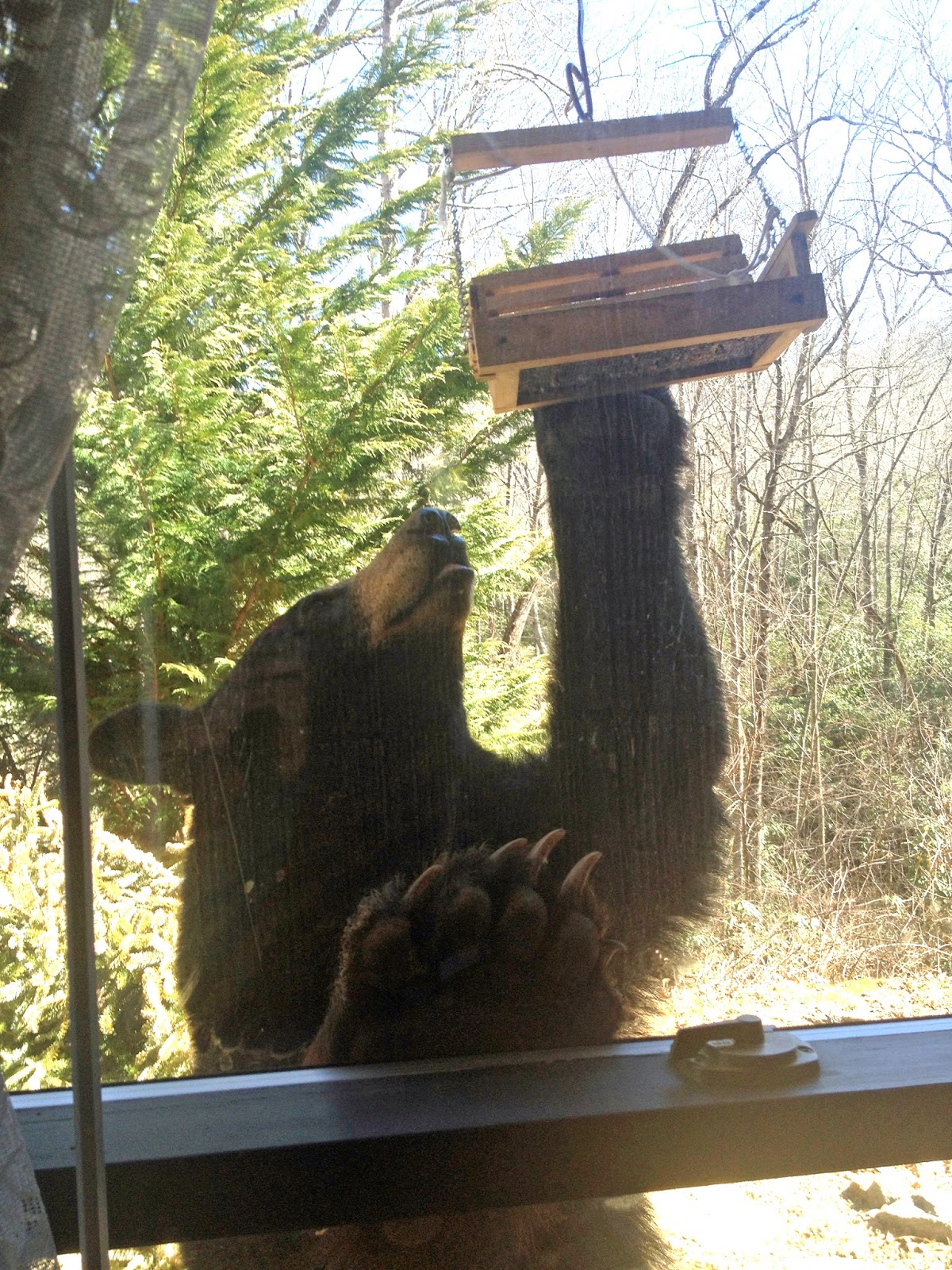 It was at about this time that Lady realized we were under siege. In 1/1000th of a second she went from peacefully asleep on the floor to full attack mode. It was something to see, my sweet doe-eyed Lady transformed in an instant to a crazed, ferocious junkyard German Shepherd, lunging and frothing, her deafening barks echoing off the walls. The bear backed away briefly, standing on its back legs to its full height to assess the threat. For an endless moment we stared at each other through the window, bear and woman with crazed dog.

Apparently deciding us to be harmless in spite of the noise, the bear resumed its efforts to get the feeder. When the bear put both paws on the window and the frame began to creak, I decided it was time to leave. 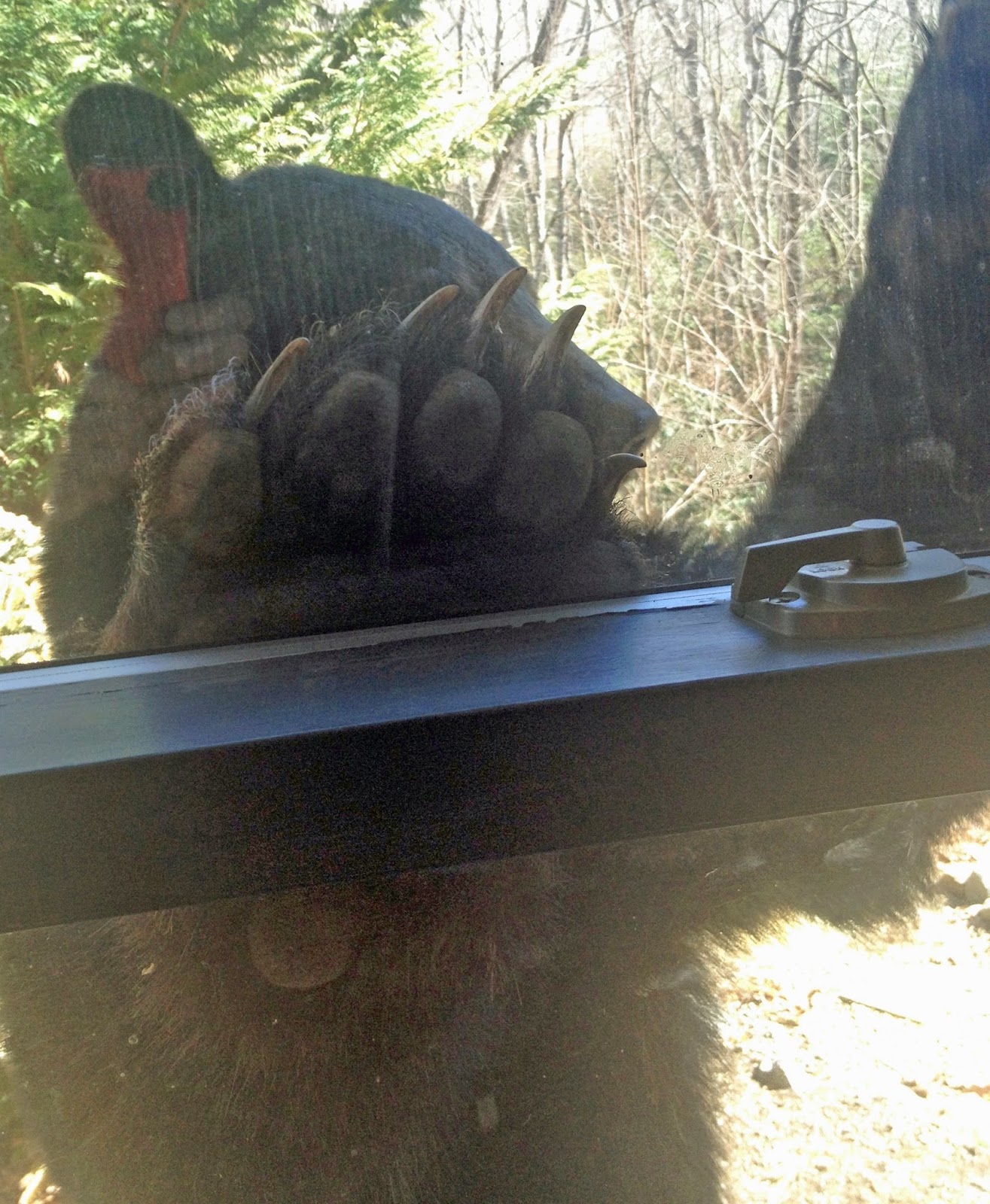 I was holding onto Lady's collar, but wrangling 85 pounds of extremely determined German Shepherd is easier said than done. She was in such a frenzy, she hit her nose on the window and gave herself a nosebleed. Bouncing and lunging in spite of my efforts to hold her, she managed to fling blood all over me and my office before I finally managed to haul her out into the hall. Katie, bless her heart, is as deaf as a post, and had just raised her head with a quizzical look on her face - "Huh? Is something going on?" - when I slammed my office door shut. Sorry Katie. I grabbed a towel from the bathroom and pressed it against Lady's nose, as she continued to bark and try to writhe free, the whites of her eyes giving her a crazed, insane look in the dim hallway. Clearly she thought this was a life and death situation, and it was her job to protect us all. After a few more seconds of attending to Lady's nose and talking to her in as soothing tones as one can muster when a bear is about to come through your window, I ran upstairs and grabbed a pan from the kitchen. People can say all they want about bear spray and such, but in my experience, a pot with a lid is the best defense against a bear. Out on the back deck, I clanged lid and pot together repeatedly, making a huge ruckus.

The poor bear ran away so fast, he fell halfway down the slope behind the house in his haste to get away. I was relieved to see him get up and continue running, apparently none the worse for the tumble. I didn't want him in my office, but didn't want him hurt either!

I went back inside and checked Lady. I didn't have any tricks up my sleeve for handling "dog nosebleeds," so was immensely relieved to discover that the bleeding had stopped on its own. Next I returned to my office...oh my... 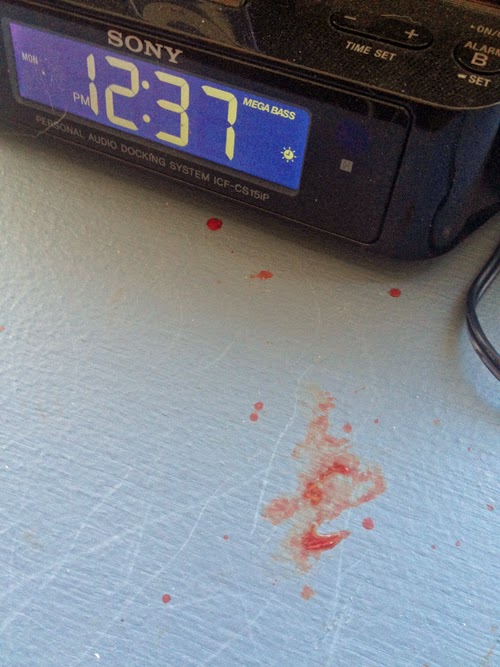 There was blood on the windowsill, splattered on the iPod dock, the floor, dripping down the windows. It looked like the shower scene from Psycho. 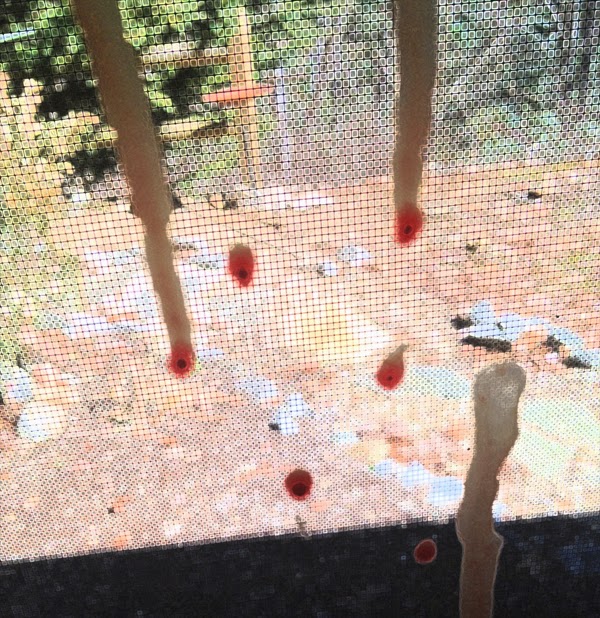 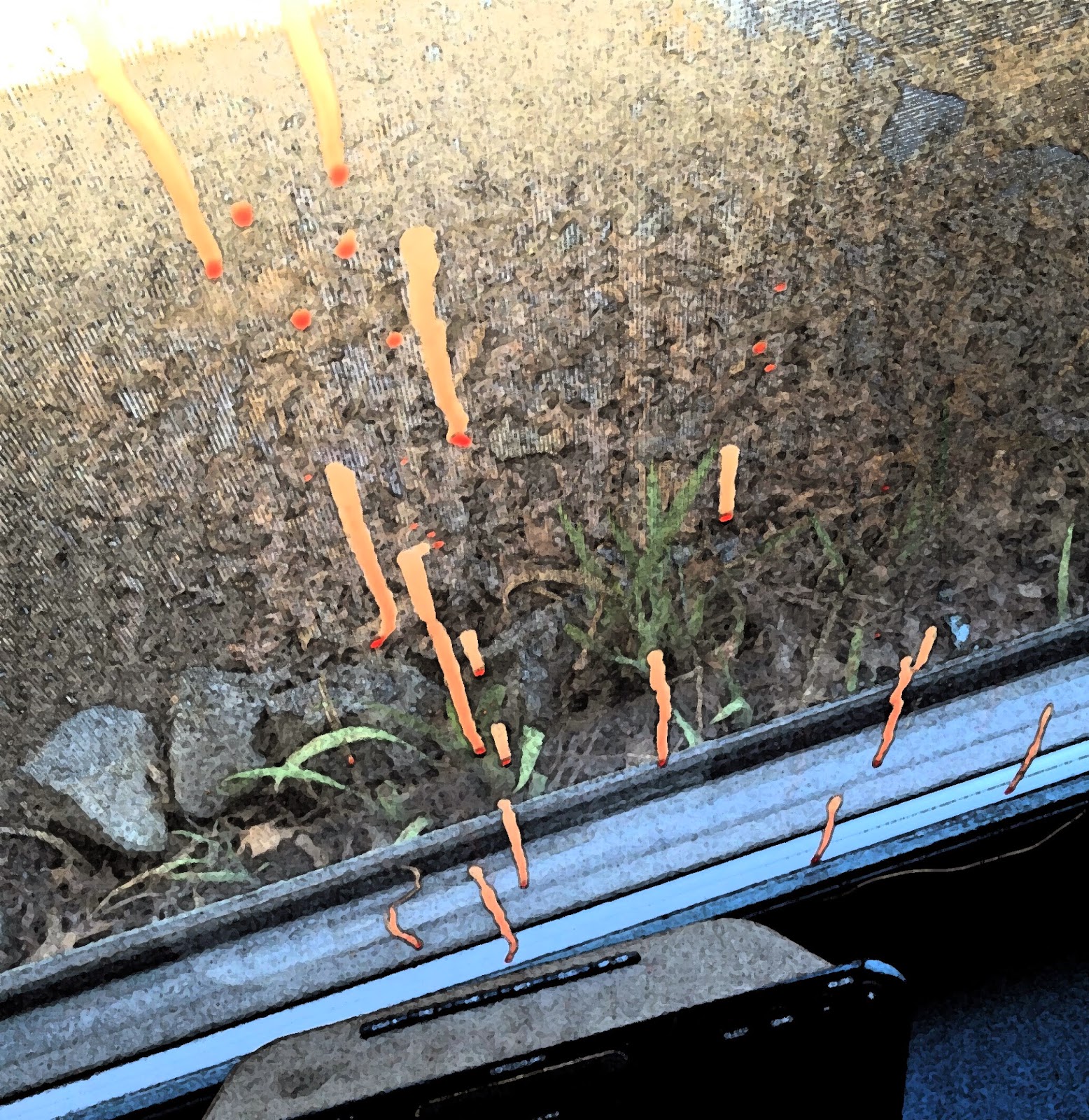 In the middle of this macabre scene was Katie, standing in the center of the room, tail wagging uncertainly. I laughed in spite of myself. Sweet little old dog. She knew something noteworthy had occurred, but wasn't quite sure what. Lady came in and sniffed her all over, making sure she was okay. After giving both of them reassuring pats, I went off in search of cleaning supplies.

The most amusing part of the whole experience came after I returned to work. Just before lunch I had been awaiting an important application from an employee trying to snag a last minute opening in a class. As I typed out the email one and a half hours later, I mentally searched for a way to explain my sudden disappearance and the delayed paperwork. Finally I settled on:

"I apologize for the delay, something unexpected came up."

If they only knew.