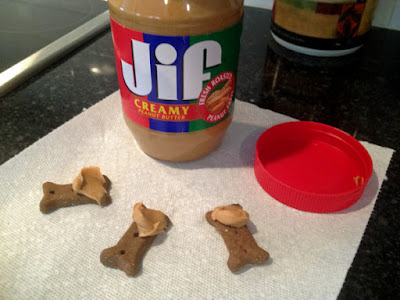 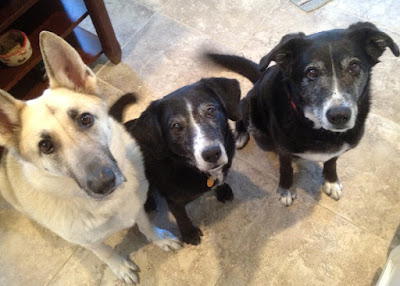 Actually, Mom is picky and prefers the all natural kind,
but dogs and birds seem to think Jif is perfectly delicious.
Posted by Brenda at 8:55 AM 8 comments: 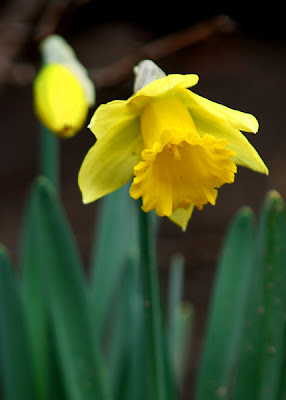 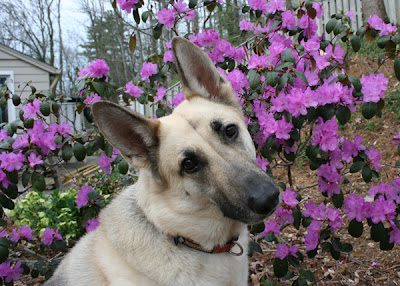 A Penny For Your Thoughts 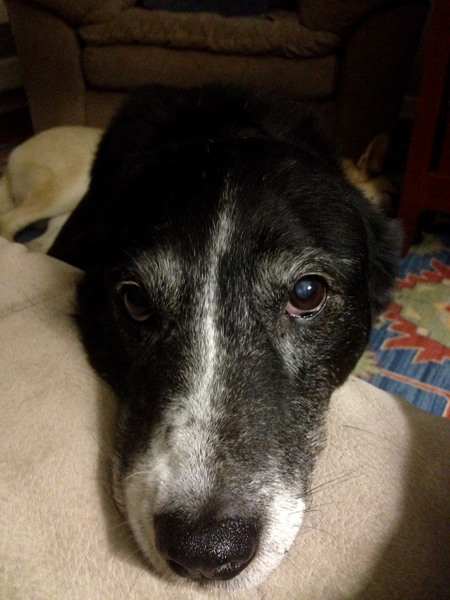 You know the feeling. Engrossed in reading a book, or working on your computer, you suddenly feel it. The dog stare. Lucky and Katie are masters of the dog stare. They will come over and gaze at you with such earnestness, you have no choice but to respond.

It seemed that all Katie wanted last night was some love. I rubbed her head, massaging her forehead and behind her ears, working my way down the back of her neck. Apparently that was it. She just closed her eyes, letting the weight of her head sink her chin deeper into the sofa cushion. Sometimes she's so cute I can hardly stand it. Neither Lucky or Lady do this thing that she does, where she rests her chin on the sofa, or chair, or on your leg, gazing up at you with those big soft brown eyes. I've never had any dog do that before. It's adorable.

I wonder what she's thinking. Katie is by far the hardest dog to "read." She's such a serious little dog. Lucky is just a happy-go-lucky boy (no pun intended) always, under all circumstances, and Lady, well, I'm pretty sure I know what's going on in her sweet neurotic head most of the time. She's probably the easiest to read. But Katie is tough. There are times when she's obviously happy - like anytime food is involved, or when someone comes home who has been away for awhile. But all that in between time. She's quiet, and serious, and sometimes I catch her watching me. What is she thinking? Is she happy? I hope so.


A penny for your thoughts, Miss Katie? 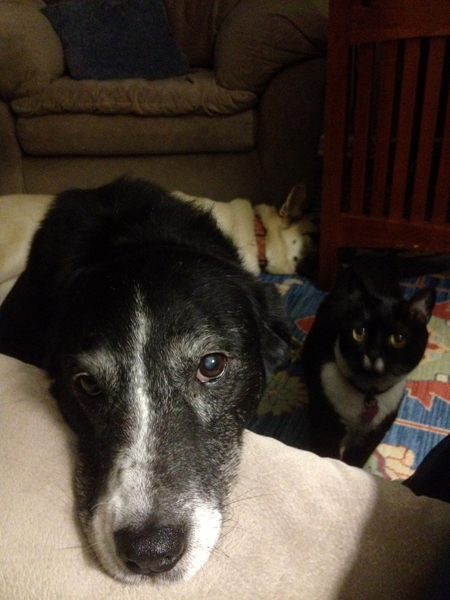 Every office should have a cat. When heart rate and blood pressure were monitored during a simulated stressful situation (participants were asked to complete challenging arthimetic problems), those with pets fared much better than those without. The article Cardiovascular Reactivity that describes this research makes for a fascinating read. Bottom line, cats are good for the health of your heart! 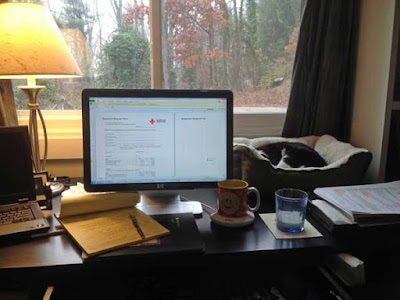 (They are also good for the warmth of your lap.) 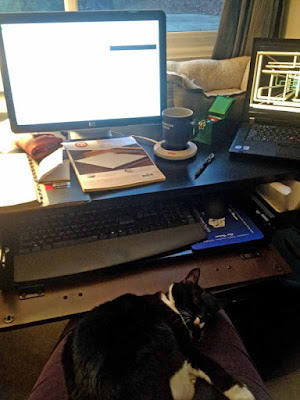 I recently saw Denver the Guilty Dog on Good Morning America, and I've been smiling ever since. I just LOVE this dog!! My goodness, if Lady had only 1/20th of Denver's highly developed conscience, life would be good. I suspect I may have been the last person on Earth to see Denver's Guilty Dog video (it's now had close to 16 million hits), but just in case any of you missed it, I'll post the link below. Bless Denver's guilty little heart, you just want to scoop him up in your arms and tell him it's okay!

This short Good Morning America clip is fun, with Denver and his people as guests on the show. What a sweetheart!!

And Denver now has his own Facebook page, with a link where you can buy "Guilty!" T-shirts. They're pretty funny. If you've got the day off today and some time on your hands, and if you haven't already discovered the Denver phenomenon, check it out. I guarantee you'll smile the rest of the day!
Posted by Brenda at 9:10 AM 16 comments:

Our friends Benny and Lily over at Two French Bulldogs recently answered a question in their Ba-Da-Bing column that got me thinking about nicknames. Every pet that has ever shared my life earned a nickname, or two, or twenty, somewhere along the way. I can't say I ever thought much about it before, but Lady, Lucky, Katie, and Lucy all have nicknames that get used at least as often - or more often - than their real names! 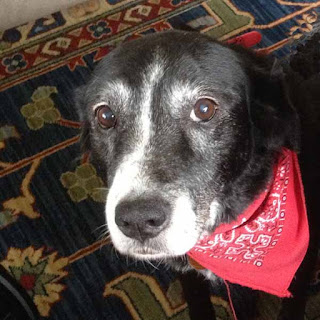 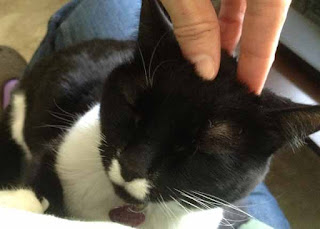 LucyBucy
LucBuc (pronounced "Loose Boose")
BowTie Kitty
Sweet Little Bowtie
Little Kitty
Arc-O-Kitty (this would have to be accompanied by a photo to make sense... it's a way she sleeps)
Baby Girl
Butter Kitty 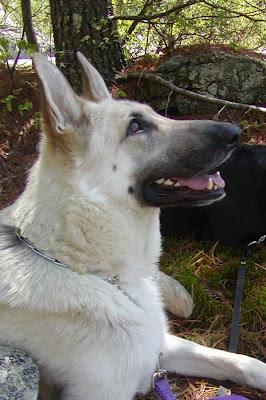 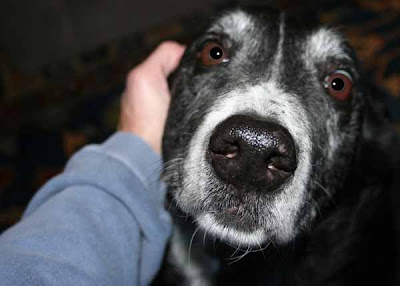 Writing this post made me smile. :) Nicknames are fun, and handy for a variety of circumstances, from expressing endearment - "What a Sweet Little Bowtie Kitty you are," to frustration - "Come on Crazy Dog, let's go back inside." I bet I'll be updating these lists during the next day or two, as I use nicknames that have not occurred to me here sitting at the computer. Do your furry family members have nicknames?
Posted by Brenda at 9:30 AM 20 comments:

Best Seat In The House 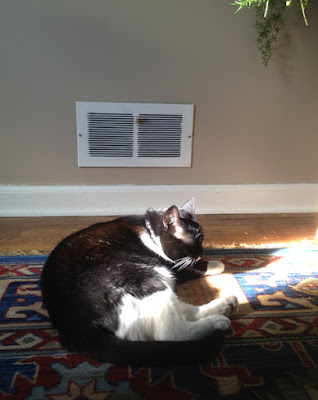 In a sunbeam, in front of the heat vent!
Posted by Brenda at 8:42 AM 8 comments: 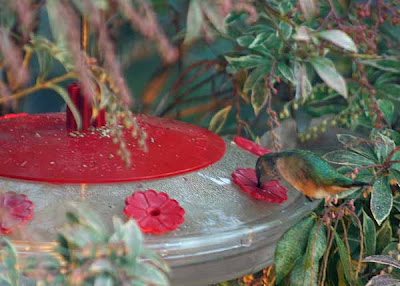 Update on Emmy - she made it through the cold snap this week just fine! Here she is feeding this morning in the shrub by the kitchen window. You often hear people say that someone or something is "tough as nails." The metaphor instead should be - "tough as a hummingbird!" This little wisp of a being weighs an eighth of an ounce, yet she survived 36 hours of windchill temperatures in the single digits and teens (for those of you who are curious, I googled that, I didn't weigh her ;).

I'm sure she's a happy little bird now - it's 40 degrees, on its way up to 51 today. Highs are forecast to be in the 50s, lows in the 30s and 40s for the next six days. This is warm for January in western NC. Maybe she has a guardian angel! 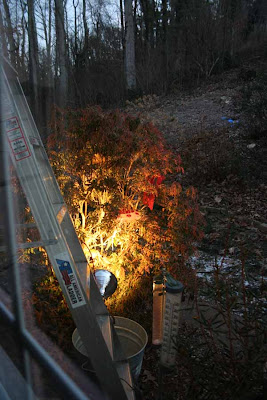 Check out my do-it-yourself bird warming station! The knowledgeable folks at Wild Birds Unlimited advised that a heat lamp can help provide a warming zone, so I purchased one at the hardware store and used the ladder to position it near the feeder. On the coldest evening, she was hovering in front of it for brief intervals!

Another part of the makeshift setup that looks a little silly but serves an important function...see that metal bucket below the lamp? That's in case the 25-30 mph winds managed to loosen or wiggle the clamp. The heat lamp would then theoretically fall into the bucket, not onto the bed of dry leaves below, which could burn the house down. They don't call me "The Fire Marshal" for nothing!

Hope the rest of you will get to enjoy milder weather this weekend too. According to the Weather Channel guys, even northern Minnesota and North Dakota will have above-average temperatures for the next few days. It probably won't last long, but let's enjoy it while we can!
Posted by Brenda at 8:13 AM 12 comments: 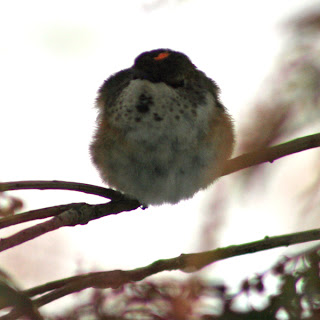 I set the alarm early enough this morning to get the hummingbird feeders out before dawn, and immediately after doing so began an anxious vigil at the kitchen window. The towhees and cardinals arrived for their sunflower seed along with the juncos and sparrows, but no hummingbird appeared.

My worry intensified when I turned on the computer and learned from the Weather Channel's website that the wind chill was 3 degrees. How could such a tiny creature survive this extreme cold? Especially considering that two days ago it was 60 degrees. I paced back and forth from the coffeemaker to the kitchen window. And then I saw it, the hovering little figure near the bush. Emmy was alive!

Thus far, the odds for our little "Unexpected Visitor" have been in her favor, as we've had a remarkably mild winter. She may wonder why Mexico isn't quite as balmy this year (assuming she had intended to migrate there along with the rest of her species), but the high temps here during most of December were in the 50s. Then came the New Year, and the Arctic blast that ushered it in. Brrrrrrr....

The bird experts came out and banded her the week before Christmas. I appreciated the fact that they asked permission, since she has recently begun to feel like part of the family. Their close examination revealed her to be a female Rufous Hummingbird, a species that spends its summers in western North America, breeding from southern Alaska to California. According to Wikipedia, most Rufous Hummingbirds winter in the Mexican state of Guerrero, an astonishing trek of 2000 miles from their nearest summer home. Given that they usually trek from Alaska down to Mexico and back, it's not surprising that I have never seen one before. 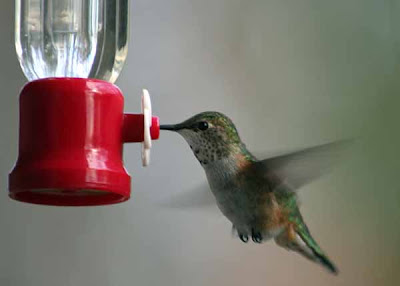 Emmy - named for her beautiful emerald green back - apparently decided to migrate southeast this year instead of due south. Perhaps she heard about the many wonders of western North Carolina - our beautiful mountains, the Biltmore Estate, or the lovely spa at the Grove Park Inn. However she should have paid more attention to the section in the travel brochure about seasonal climate. It can get very cold here. Last winter we had 20 inches of snow. The year before that it was 40 inches. I've never been to Mexico in the winter, but I'm assuming they don't get much snow.

But so far, so good. Last night was brutally cold, and she's alive this morning. The feeders are freezing in the time span of about an hour, so I've been rotating them in and out of the house all morning. Frozen ones come in, warm ones go out. She's generally staying in the Pieris Japonica shrub in front of the kitchen window instead of in the rose bush on the hill, which has been her preference. Perhaps the shrub close to the house provides extra warmth and better protection from the wind. A little while ago, I decided to try putting one of the warmed feeders in the shrub instead of on a hook out in the open. She was feeding from it within minutes.

The high temperature today is forecast to be 27 degrees, the low tonight 15. It's going to take some work to keep her supplied with unfrozen nectar today, but if she can make it through another 24 hours of this cold, much better weather is on the way. The forecast high tomorrow is 45 degrees, and back up to 57 degrees for Friday and Saturday, with mild night temps as well. Hang in there Emmy!