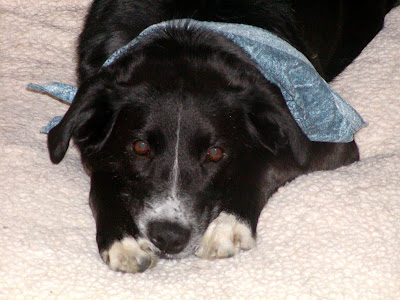 Lucky was an accident. Or rather, his joining this household was an accident. We'd lost Jessie in June of 2004 and had no intention of getting another dog anytime soon. Some people, upon losing a beloved pet, can go right out and adopt another dog or cat - both to help another animal in need and to fill the void. I am not one of those people. A new dog was the last thing on my mind in September 2004 when a series of hurricanes (Frances, Ivan, and Jeanne) plowed through the southeast. 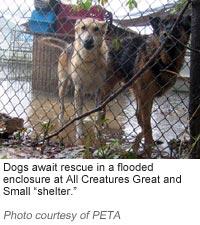 One of these storms, Frances, flooded a local no-kill "shelter." I use that word loosely, because it was a facility that the state and PETA had been attempting to shut down for years. I knew nothing of this, however, when I responded to a plea on the local news for volunteers to assist in the emergency care of almost 600 animals being temporarily housed at an old state prison of Stoney Mountain Road.

Words can hardly do justice to what I found when I arrived. Cages and crates were everywhere. Dogs were lying in their own waste, and many of the crates were out in the broiling sun. I grabbed anything I could find on the ground - pieces of cardboard, a jacket some volunteer had dropped - and placed these things on the tops of the crates to provide some shelter from the sun. I walked dogs, I helped clean cages, I poured kibble into bowls. And I left traumatized. How could a shelter have so many animals? How could they possibly be properly cared for?
The story came out in the days and weeks that followed, and is detailed in the article below from the PETA website. Warning - this material is disturbing. I've only read the summary article, not watched the video. And I haven't read the in-depth report of the investigation. I find stories about animal cruelty and neglect too disturbing, and they haunt me. However, the article describes what PETA found when they conducted an undercover investigation in response to complaints about this shelter. http://features.peta.org/AllCreaturesGreatAndSmall/
A less graphic article detailing how the shelter was finally shut down on February 1, 2008 can be found on the Animal Legal Defense Fund website:
Free at Last! ALDF Helps Shut Down Nightmare "Shelter"
http://www.aldf.org/article.php?id=571

And for those interested in the flood itself, the following link is the text from an archived newspaper article describing the rescue of the animals from the flooded shelter.
http://www.itsfortheanimals.com/Hurricane%20Frances%202004.htm