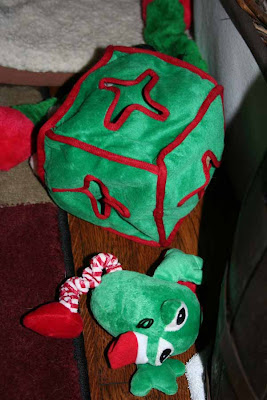 Lady loves her toys. And this week, much to her delight, it was time to get the Christmas toys out of the attic. She has a ridiculous number of toys, so some get "rotated" to the attic for a while, then returned a few months later to a great fanfare of dog joy. But the Christmas toys go away for the entire year, which makes them EXTRA SPECIAL.

Lucky and Katie don't really share Lady's enthusiasm for toys. Lucky will play for a few minutes when he gets caught up in the excitement, but he never seeks out a toy first. And Miss Katie, it's hard to figure out what's going on in her little border collie-lab mind. At first it seemed that she didn't like toys. She appears interested when the toys come out, but then she quickly tiptoes away once the other two start to play. Maybe she's afraid she's going to be trampled. That might be it, because it's obvious she's curious. She'll lurk around when Lady and Lucky are playing, occasionally sneaking in to pick up a toy that one of the other dogs has abandoned, then quickly making off with it to her bed. But Lady loves the toys. She loves to hurl them into the air and pounce on them. And chew them. 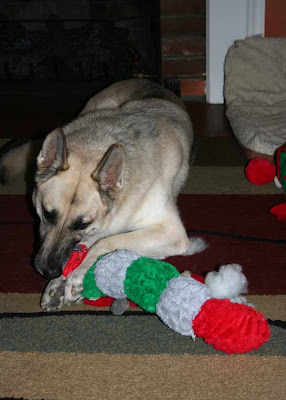 I should note that Lucky's disinclination to initiate play is in stark contrast to the opening of new toys. He loves to receive a new toy. Those of you who have been following this blog for awhile may recall the toy story drama when these Christmas toys arrived! In any case, Lady thinks it's just fine that her siblings don't like to play with the toys as often as she does. More fun toys for her! As you can see in the next photo however, she's not taking any chances. She's got Santa secured safely under her right paw, and Christmas Worm under the left. 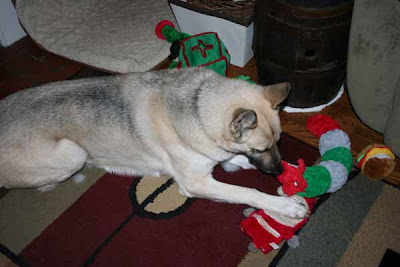