While the rest of the country has been baking in one of the hottest and driest summers on record, western North Carolina has been cool and wet. Highs have generally been in the 70s this month, when normal August temps are 80s and 90s. And the rain!

It rains EVERY. SINGLE. DAY. I am not exaggerating. Despite the fact that today was forecast to be partly sunny, it is raining as I write this, the promised sun hiding somewhere far, far away. Missouri or Iowa no doubt, where it is not wanted. 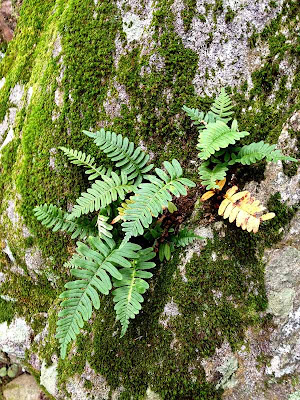 When I think of August, the image that comes to mind is a dry, brown lawn surrounded by trees with unenthusiastic leaves that look weary of summer. Not so this year!

If I walked out my front door and didn't know better, I would think it was April. Everything is green, vibrant and lush...remarkable. That's the positive side of all this rain. The downside is that it's almost impossible to plan any kind of outing.

This weekend, I decided the time had come to scrutinize the hourly forecast and attempt a hike in between rain episodes. Somewhere close by, so as not to have a repeat of that very frustrating experience of driving all the way to a trailhead, only to discover that it's pouring when you get there - a scenario that has occurred several times this summer. Try explaining to three disappointed dogs why you are turning around and going home after arriving at a favorite destination.

But yesterday the weather cooperated. The destination was a loop trail in Montreat, only 10 minutes away, that utilizes parts of 3 separate trails - the Greybeard Mountain trail, the Harry Bryan trail, and the Julia Woodward trail (P.S. I want someone to name a trail after me when I die). As a bonus, this particular loop promised a side trek to a small waterfall. 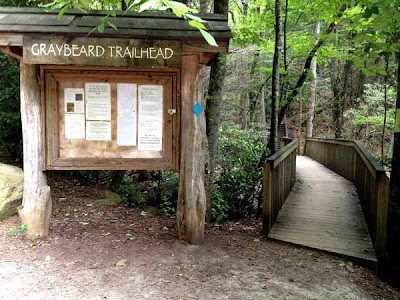 Despite this loop being so close, I only recently learned of it from an acquaintance. I've been up Greybeard before, in my younger more ambitious hiking days, and there's no way the senior dogs could do that trail, which is 5 rugged miles one way. But this little two mile loop was perfect (although for the record, it felt longer than 2 miles! Lots of climbing) We had a grand time. I will share the experience with you through some of the photos I took along the way. 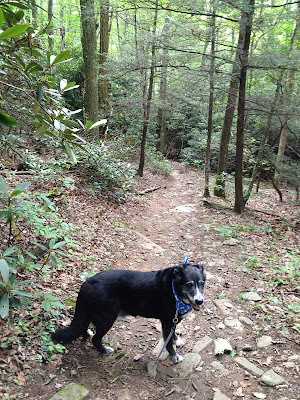 Lucky is always the first one out. As soon as he's out of the truck and on the trail, he's in his element. Lucky loves hiking. And I love the great big smile he gets on his face when we hit the trail.

I'm so very thankful that even though he's 12 years old, he is healthy and not limited by arthritis or any other condition. He can't go as far, but he can still go. Knowing these carefree canine athletic days may be numbered now makes these little adventures even more special.

These trips into the woods often inspire gratitude. I feel grateful for health and the ability to walk and to see and to smell. 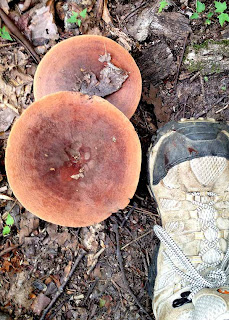 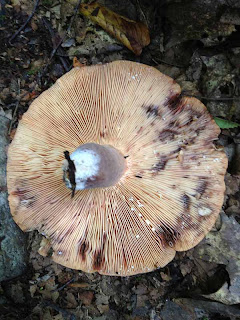 So many things to see and smell in the woods.

In some areas, it was obvious that violent storms had shaped the forest. I would not have wanted to be there when this massive tree fell across the trail! 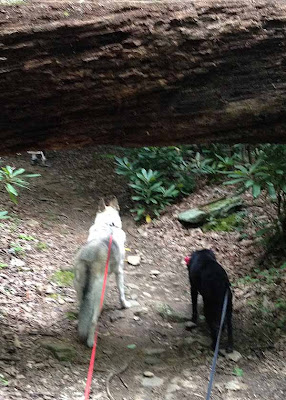 Can you imagine the sound when this giant came crashing down?? 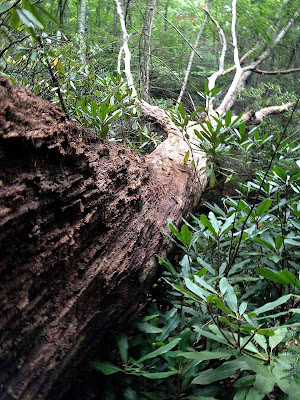 After climbing for a half hour or so, we arrived at Julia Woodward Falls. There were striking boulders, a wooden bench, and a sweet little waterfall. 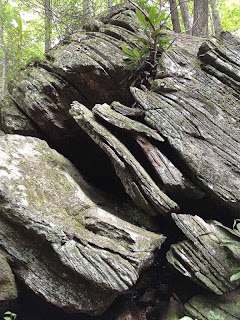 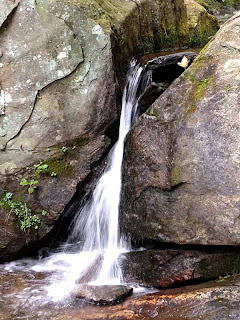 Doing a bit of boulder scrambling up the trail alongside the creek provided a fun discovery. Over many, many years, the water coming down the mountain had carved a trough through the rock - and this is what created the waterfall. What a beautiful green glorious sight it was, looking back down the ravine. Check out this tree, clinging to the rock with its feet. I wonder how it came to be this way, crooked and bent and poking out over the cascading water? 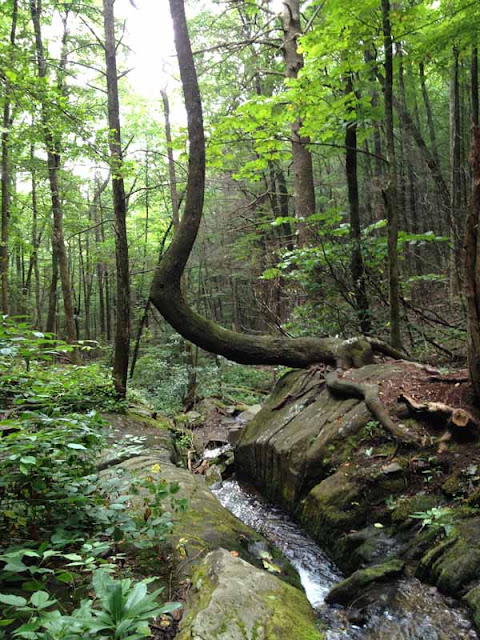 ("Enough of the picture taking - can we go already??") 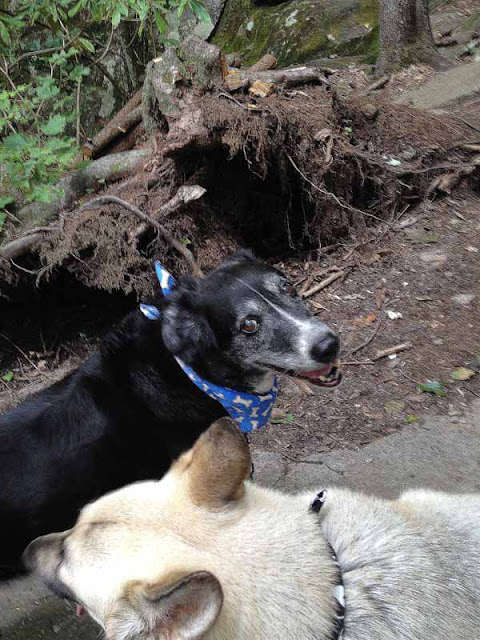 Saying goodbye to the falls and heading back down in search of the connector trails, it was nice to discover that the intersections were all well marked. 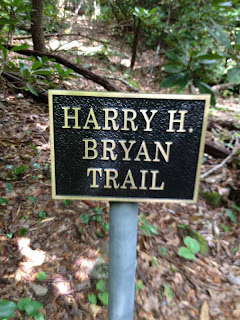 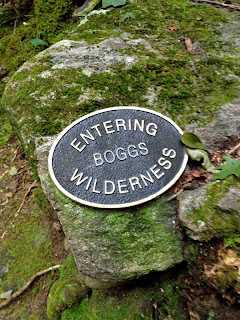 The only moment of uncertainty came upon arriving at a wooden footbridge over a rushing stream blocked off with yellow caution tape. The final trail intersection, according to the map, was just on the other side of the "broken" bridge. Hmmm.

A look at the stream below quickly put to rest the brief thought of a water crossing. But upon closer examination, it appeared that the caution tape was in place because of broken railings, not any inherent problem with the bridge itself. And the final bit of convincing evidence was that the tape barrier on both sides showed evidence of hikers having disregarded the warning. On the close side it was hanging low as if it had been stepped over, and on the far side it was down altogether. And since there were no broken boards in the middle of the bridge or broken hiker bodies in a heap below the bridge, off we went. 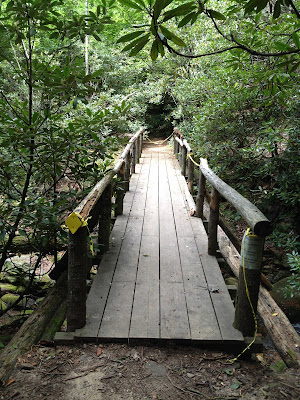 Photo taken after the successful crossing! Indeed, the next trail intersection was right there on the other side. Glad we didn't have to turn around and go back! This helpful sign was a bit farther past the intersection. Made me wonder how many hikers had inadvertently wandered off into the wilderness looking for the parking area before this sign was posted. 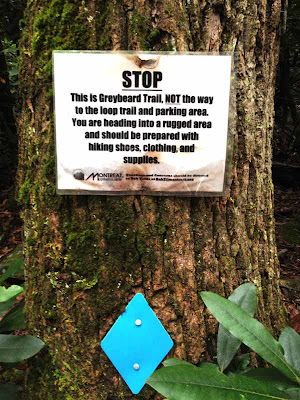 After another hour or so of hiking, meandering, sniffing every leaf and rock, and taking photos, we made it back to the upper parking area. Happy and filled up with all the good things that come from time spent in the woods, we trekked back to the truck and piled in, the first raindrops of the day splatting down in one of those moments of perfect timing. 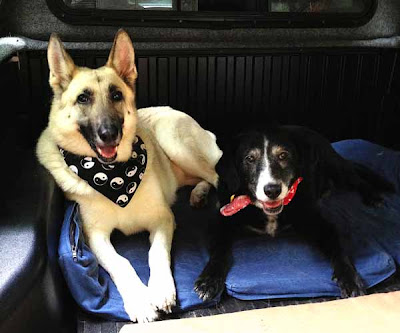 An information board located near one of the other trailheads off the parking lot contained a wonderful quote by John Muir. I hope you have enjoyed seeing the photos from our hike, and I will close this post with his words. 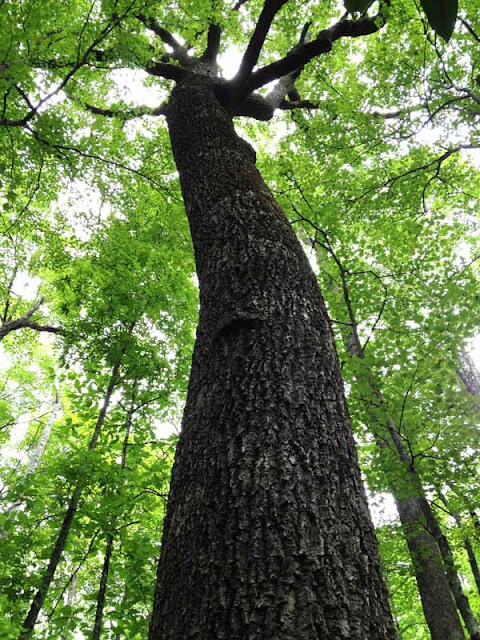 "Climb the mountains and get their good tidings. Nature's peace will flow into you as sunshine flows into trees. The winds will blow their own freshness into you, and the storms their energy, while cares drop off like autumn leaves."   John Muir