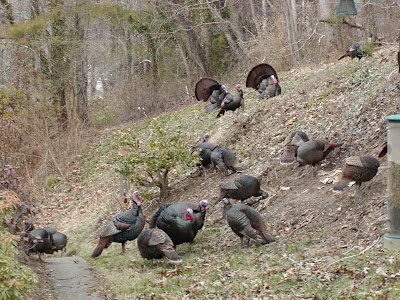 Have you ever heard a turkey gobble? Now I don't mean a single gobbling turkey, but rather the sound of an entire group of turkeys doing a deafening "group gobble." It is something to hear, let me tell you. The abundance of wild (I use that term loosely) turkeys in the neighborhood was a source of wonder and amazement when we first moved here. Operative word "was." It is still awe-inspiring to hear one of those enthusiastic group gobbles, but in general, the novelty of having turkeys as neighbors has worn off. This is more or less how it went: 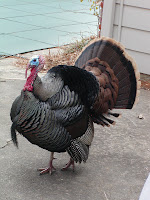 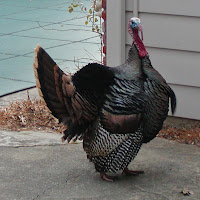 ﻿
2005 - The turkeys are out back. Look at all those colors! I had no idea turkeys were iridescent. And what's that shock of hair hanging off his chest? 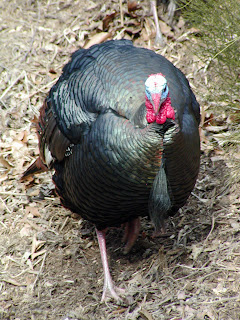 2006 - The turkeys are out there again.
﻿2007 - I wish the turkeys would go hang out somewhere else, they're eating all the bird seed and kicking the mulch around. 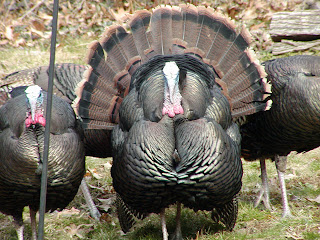 2008 - "Shoo! Shoo!" (it was around 2008 that I became a spectacle for the neighbors, often running outside in my robe and fuzzy socks screaming and waving a broom in the air. Come to think of it, I broke that broom slamming it onto the sidewalk in an attempt to scare them away. But the turkeys aren't easy to intimidate. The darn things are huge and they just look at you with their beady little eyes like "Hmmmph!") 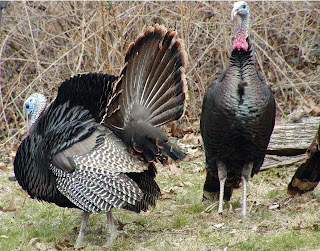 2009 - Nice concrete driveway replaced rocky gravel driveway. Turkeys appreciative of the new, smoother means of transport from front yard to back yard. Show their appreciation by leaving gifts of brownish green blobs up and down the entire length of the driveway from mailbox to garage. YUCK!!
2010 - Discovered a new means of turkey management. One day it occurred to me - "I have two herding dogs!" I was afraid to chance it though, fearful of a turkey getting hurt (I don't want them in my yard, but don't them hurt either), or alternately a dog filled with a new sense of freedom and purpose running off down the road never to be seen again. Lucky, the border collie/lab mix, would be the one to follow his nose and take off, so Lady got the job.
I don't know if they have turkeys in Germany, but it turns out that a German Shepherd is an excellent turkey herder! Who knew? One afternoon I waited until the turkeys were at a safe distance, so they'd have plenty of time to fly off before she got there. Not knowing what to expect, I held my breath, then told Lady "Okay girl, go get them!" She knew instantly what I wanted her to do, rocketing down the front hill. I watched in amazement - she didn't chase or try to attack them, she just herded them off the property. Most of them chose to scurry off on foot rather than fly (cocky little buggers), and what I found astonishing was that Lady did not pursue them past the edge of the property. She ran up and down the property line until they were all in the street, then looked up the hill at me beaming with pride. I told her "Good girl! Come on back!" and she came running back. Wow. Cool!
﻿﻿﻿﻿
﻿﻿﻿﻿
Posted by Brenda at 8:40 AM