Life With An Omnivore

I ask, does this look like food to you? 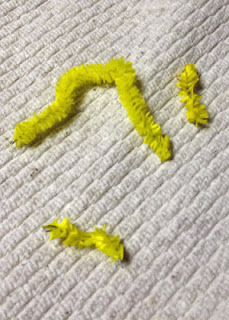 No? Very good, that is the correct answer! Because it's NOT food. It's a pipe cleaner. This distinction is lost on our little scoundrel Katie, who insists on testing anything found on the floor for edibility. Thus I return to this blog in much the same way I left it, worrying about Katie having consumed something not meant to be consumed.

This particular object was a homemade kitty toy, a pipe cleaner used for some long forgotten craft project, twisted into a little curl that would skitter across the smooth tile floor in the most wonderful way, batted this way and that by little black and white paws. The thing has been around for years - mostly living in the toy basket, but coming out from time to time for a spin around the kitchen. Now, I am aware that some dogs will eat anything they can find on the floor. But I have never had one of those dogs. At least not until Katie.

Fortunately I acted quickly when I heard the odd metallic "crunch." Check out the end of this thing! The rest of the evening was spent imagining various scenarios in which the segment she swallowed got caught in the lining of her stomach or punctured an intestine. 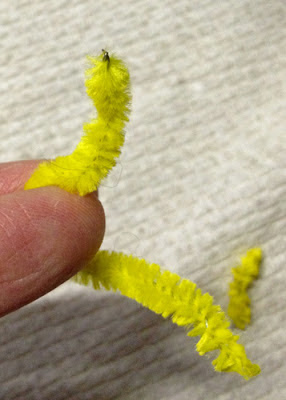 But apparently we have once again managed to avoid disaster. She seems fine, and all cat toys both homemade and otherwise have been confiscated (sorry Lucy). And just to reassure any who might be reading this post and thinking "Why that poor dog must never get any treats. She must be eating strange objects out of desperation..," Katie gets plenty of treats. Santa even brought all the dogs choo hooves, which they'll get to chew at least a few times before I get too worried about broken teeth. 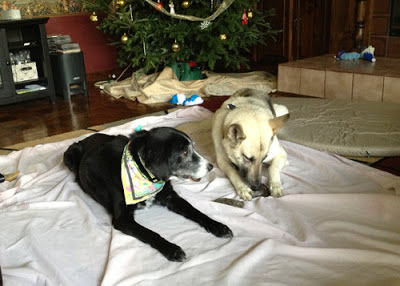 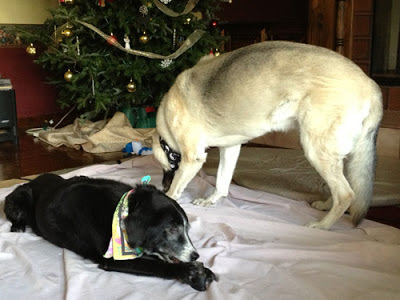 And as far as two of the three dogs are concerned, one of the best treats ever?... 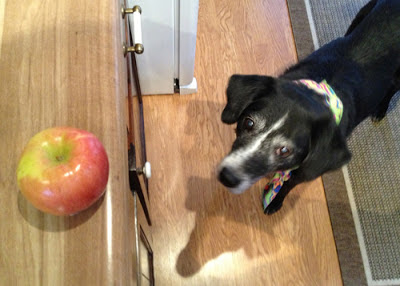 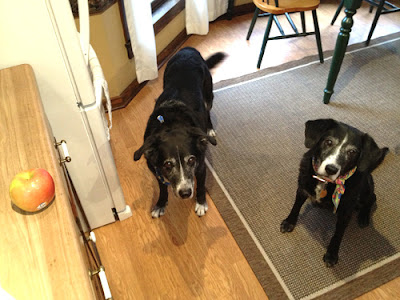 Lady finds apple slices quite hideous. But she can't help herself when the other two get so excited, tails wagging, toenails clicking on the floor in the dance of anticipation, so she will line up for her fair share. It's a riot to watch, although I must try very hard not to laugh. Lucky and Katie eagerly gobble their slices, sometimes getting scolded for chomping my fingers in their haste. Lady then steps forward, unable to resist, and gingerly takes the offered slice between her teeth, lips pulled back to minimize the likelihood of their coming into contact with the apple. Anyone who has ever known a German Shepherd can likely imagine the look on her face at this point. When forced to eat something out of peer pressure, the German Shepherd adopts a facial expression that manages to be both offended and determined at the same time.

Lady chews a little, all teeth, lips still pulled back to a safe distance, and after several exaggerated chewing efforts, spits the mushy slice onto the floor. Katie spies her opportunity and moves in, at which point Lady quickly but reluctantly picks it back up again. Finally, after several repetitions of this cycle, with both Katie and Lucky observing the process hopefully, she manages to choke the thing down. 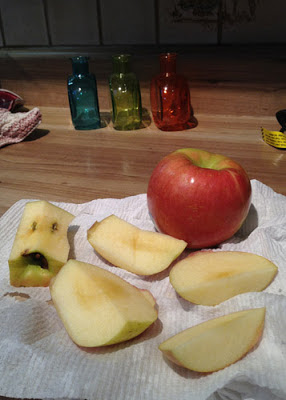 I usually end up feeling sorry for her, and slip her a milk bone
while the other two are enjoying their apple slices. 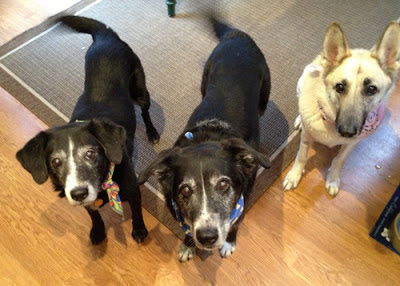