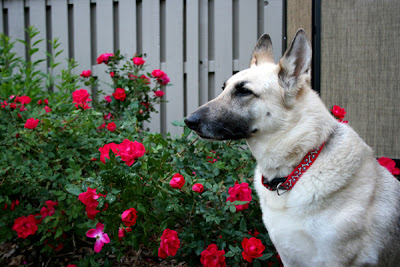 A dilemma divided by 2 is only half a dilemma. So therefore much smaller and easier to manage. This appears to be Lady's philosophy, as she never lets me face any dilemma or difficulty alone. I continue to be surprised and amused by her intuition and desire to "help." 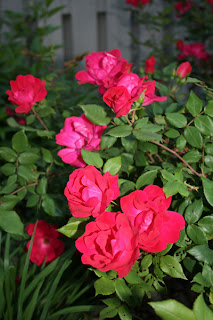 Over the weekend, I'd been admiring the Knock Out rose in the corner of the yard. Laden with dozens of ridiculously red blooms, it has never been as spectacular as it is this year. As soon as I saw it on Saturday morning, my instinct was to run and get the camera, but I forced myself to resist. I have so many photos of plants and flowers that when I'm dead and gone, future generations are going to think I knew no people at all, only flowers.

On Sunday evening I stepped out into the yard again, this time to a horrible sight. The heavy screen I'd placed in front of the propane gas tank the day before had blown over and squashed the beautiful rose bush. In shock, I yelled something like "ACCKK!" and went running to its rescue. So did Lady. I'm not even sure why I ran, it's not like 3 additional seconds of being squashed was going to make a difference - but ran I did. I grabbed the screen and lifted it off, and that's when I became consciously aware that Lady had run to the rose bush with me, and was still at my side. Ears and tail up, on "high alert" status. And as I wrestled with the screen, trying to get it back into the proper position her nose was pressed to its edge working the scent, as if trying to determine what evil lurked there to have distressed me so.

Ladybelle remained by my side as I attempted to resuscitate the flattened bush. I propped some branches back up, and clipped the broken ones, eventually restoring it to some semblance of its former self, albeit slightly more 'horizontal.' All the while Lady stayed close, ever ready to assist as needed. What a good dog.